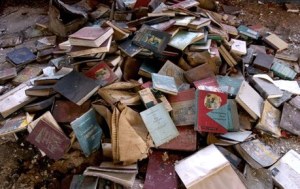 Many of you will have already read the condensed version of Ewan Morrison’s talk at the Edinburgh Book Festival, which was published in The Guardian on Monday. If you haven’t, you should: it provides a bracingly unsentimental account of the difficulties facing publishing in general and authors in particular as the print economy transitions to digital. Central to Morrison’s argument is an assumption the transition to ebooks will be rapid, that the same pressures from piracy and consumer behaviour that have reshaped the economics of other industries will drive book prices down to levels which are incapable of supporting authors, and that this in turn will lead to the fairly rapid collapse of the economy of advances and royalties that has sustained professional writers.

It’s unlikely to come as a surprise to regular readers of this blog that I largely agree with Morrison’s arguments. One of the odder aspects of the discussion of the challenges facing the publishing industry over the past few years is the collective delusion that somehow publishing will be shielded from the disruption experienced by industries such as the music industry. I’ve lost count of how many times I’ve heard people say things like “people will always want books”, “there’s something special about browsing in a bookshop” or “my seven year-old loves reading, therefore there’s no crisis”. All those things might well be true, but it’s not going to hold back a tide of change driven by a fundamental shift in the economics of the industry.

All that said, I think Morrison’s article should be read as much as provocation as thesis. There’s little doubt it’s framed within a well-founded unease about the increasing cultural power of behemoths such as Amazon, Google and Apple, or that it wants individuals and governments to at least question our assumption that we have no capacity to manage this transition (Robert Darnton has been making  similar argument in his campaign against the Google Book Settlement).

I’m with Morrison on this. Governments need to understand the interests of citizens and corporations are not the same thing, especially when it comes to the control of culture. But I also think Morrison’s provocations cause him to if not overreach, then certainly to assume the future will be neater than I think it probably will be.

The first thing that’s worth saying is that while I think Morrison is right in arguing that the attachment of older readers to the codex book is unlikely to be replicated in younger readers, I think he’s wrong in assuming this will mean an end of the book altogether. Certainly it’s worth noting that parallel to the rise in digital formats has been a rise in print-on-demand and bespoke publishing. How big the market for these will be is unclear, but I suspect what we’re really looking at is a generational change in the material economy of the book, which will see it move from being a low-cost (or relatively low-cost) consumer good to being a more exclusive, prestige object.

Of course even if I’m right about this, that’s unlikely to make a big difference to either the large-scale economics of publishing or the bottom lines of authors. That difference has to be found in the digital economy, which will, as Morrison suggests, probably supplant the current print economy within a decade.

Morrison’s argument is that piracy will dramatically undercut the economics of publishing in the same way it did in the music industry, and that in the process it will drive a change in consumer attitudes. I suspect he’s part-right on both scores: piracy is an issue, and will become a bigger one in years to come. And the demand for lower and lower prices is real and increasing, as the spats around authors and publishers stressing the fixed costs of book production show.

But Morrison neglects what seems to me the other big lesson of the music industry, which is that as the success of the iTunes Store demonstrates consumers are prepared to pay for content if it’s easily available and priced competitively.

The next question is, of course, whether consumers are prepared to pay enough to support something that looks like the publishing industry as it currently exists. I’m not going to pretend I have an answer to this, but my feeling is the answer is yes and no. The past couple of years have been pretty ugly for a lot of publishers, with a bad Christmas last year and rapidly declining sales in the first half of this year. The figures are complicated by the rise in digital sales, but in Australia while the volume of physical book sales has held up because of the sell-offs of stock by Redgroup, value has fallen, fiction is down 10% and sales of the top 10 books are down by as much as 50% (some publishers speak privately of declines in sales of 25 and 30% across the board). Although at least some of this decline can be attributed to the exceptional circumstances such as the recession and the collapse of Redgroup in Australia and Borders in the US, they’re not the whole story, and if profits keep falling it won’t be long before publishers start having to restructure their operations.

That bland term, “restructuring” is really code for layoffs, reduced commissioning and cancellation of projects. And as such it can’t help but hurt both the people who work in the industry and writers. Morrison correctly asserts the “advance economy” is under siege (“10k is the new 50k”), arguing this economy has enabled a generation of writers to develop their craft. I think he’s attributing too much importance to advances, and that it’s actually the system of royalties underpinned by copyright that enable writers to work, but he’s not entirely wrong, and as advances disappear it will be increasingly difficult for many authors, especially literary authors, to make a living wage.

Obviously this is bad news for many writers and publishers. But again I’d argue the real lesson of the music industry is that as the initial disruption passed other business models began to appear, from Spotify to Bandcamp, as creators and publishers found new ways of reaching audiences. Some involve disintermediating the music labels and selling direct, others use quite different business models. But what they do demonstrate is that in the right circumstances consumers will pay for content, and that there are alternative distribution mechanisms to the Amazon/Apple/Google monopolies.

I’m not going to pretend I know what these mechanisms will be. I have some ideas, but I think one thing we can safely assume is that there will be many more of them than we’re currently used to, and each will serve different markets in different ways. Whether these new models will be capable of sustaining writers in the way the old system did seems to me to be an open question. I suspect the truth will be, as it’s always been, that not many writers will make a lot from their work, but I also suspect it’s going to get a lot harder quite quickly, especially for writers such as myself. But writers and publishers who are prepared to adapt and experiment will succeed.

Which brings me to the last two things I want to say. The first is that I think one counterweight to the general bleakness of Morrison’s argument is that the experience of the music industry has been that the decline of the traditional models has allowed much greater diversity to emerge, alongside a boom in things like music festivals, and my guess is the breakdown in traditional models is already engendering something similar in publishing. The hegemony of the poem/short story/novel division is already under siege, with publishers launching projects such as Pan Macmillan’s digital-only Momentum imprint, which will publish novellas and works not suited to print, and it’s quite clear there’s a hugely energetic community of writers and artists creating works which don’t fit into traditional categories all around us.

The other is that I think Morrison is right, and it is vital we stop assuming we are unable to use these processes to benefit the public as well as corporations. It is possible to find ways of supporting creators, whether that’s through traditional mechanisms such as direct grants or less traditional systems of licensing such as that administered in Australia by the Copyright Agency. And that governments need to be very wary of the agglomerating strategies of Google and others. Once again there’s unlikely to be a one-size-fits-all solution, but I’m not sure there ever has been, either in business or for writers.

Tags: Books, ebook, Ewan Morrison, Publishing
From: Books, Publishing, Technology
← A little music for the weekend …
The Marine Quarterly reviews The Penguin Book of the Ocean →
22 Comments Post a comment