This ship is dead: Battlestar Galactica and the tyranny of explication 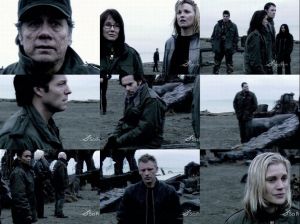 Like most devotees of that most improbable of televisual phenomena, Battlestar Galactica, I’ve been blown every which way by the final episodes. With eight of the final ten down, the show has lurched from two of the most powerful and shocking hours of television I’ve ever seen (‘The Oath’ (4.15) and ‘Blood on the Scales’ (4.16)), to dot-point infodumps (‘No Exit’ (4.17)) and weird, slow car-crashes such as ‘Someone to Watch Over Me’ (4.19).

At one level the sheer haphazardness of these final episodes shouldn’t be surprising. For all its power as a series, Battlestar Galactica has always been pretty variable episode to episode. In part this is a consequence of the show’s very particular aesthetic, which discards almost all of the connective tissue and explication ordinarily expected in a television show. Combined with the claustrophobic intimacy of the handheld camerawork, this paring-back lends the show its extraordinary, almost hallucinatory intensity, but it can also leave individual episodes feeling surprisingly ragged.

But it’s difficult not to suspect the haphazardness is also at least partly a function of exactly the qualities that have made the show so remarkable. Despite its complex and deeply unsettling political subtext, much of Battlestar Galactica’s fascination has lain in its suggestiveness, and the constant, teasing implication that in the end its many elements will come to form a larger whole (not for nothing do the opening credits inform us that the Cylons “have a plan”).

The problem is of course that it is difficult to picture an explanation capable of drawing the show’s many elements together. Getting echoes of The Aeneid, The Book of Mormon, Paradise Lost, Exodus and other mythic sources, as well as post-9/11 anxieties about terrorism and loss and the War on Terror into the air together is one thing, but once they’re married to the mystery of the Cylons’ origins, the show’s own mythology, questions as to Starbuck’s true nature, the President’s visions, the political subtexts and most particularly the show’s constant, haunting refrain that “All of this has happened before, and will happen again” it’s difficult to see how the show’s creators can keep them all aloft at once.

Certainly the explanations offered thus far have been pretty unsatisfying. Quite aside from the jarring note of the Final Cylon’s identity, the attempt to explain the Cylons’ origins and the nature of the Final Five have managed to be both confusing and unsatisfying, managing to simultaneously reduce the show’s complex political allegory to a squabble between a spoiled son and his parents (as io9.com’s Annalee Newitz has observed) and to make the uncanny and profoundly disturbing Cylons oddly mundane. Then there’s the slightly too literal metaphorical business of Galen repairing Galactica by grafting Cylon biotechnology into her body, and the messy process of reorganizing the Council to reflect the changed composition of Human/Cylon society. And then, for every great moment, such as last week’s funeral for the crew killed trying to repair the damage caused by Boomer’s escape, and its glimpse of three separate belief systems struggling to make sense of the same questions of mortality, and loss, there’s a bum note such as Baltar’s speech at the funeral’s conclusion (though I think this most recent incarnation of Baltar is pretty unconvincing in general).

As I’ve observed elsewhere, there’s always been something slightly unnerving about the show’s creator, Ronald D. Moore’s openness about the casual manner in which many of the crucial decisions about the show are made. We want, as viewers, for it all to connect in a meaningful way, and more importantly, in a manner which allows the explanation to be more interesting than the process of getting there. But the fact is, with a show like Battlestar Galactica, where the ambiguities its political and mythic allegories suggest are much of the point, that’s unlikely to be a desire that’s compatible with resolution, or at least conventional resolution of the sort series television usually demands.

I want to write at more length about the final season once it’s done and dusted (I’ll probably wait for the Cylon-centric Edward James Olmos-directed telemovie which is apparently going to appear as a weird sort of coda somewhere between Saturday week and the DVD release of the spinoff series, Caprica) but in the meantime, Sophie Cunningham at Meanjin has very kindly given me permission to reproduce a piece I wrote about the show, ‘All Of This Has Happened Before And Will Happen Again: Humanity, Inhumanity and Otherness in Battlestar Galactica‘ for the magazine’s December 2008 issue, which I’ve made available via my Writing page. The piece was written in the interregnum between the first half of Season Four and the second, so parts of it have been oveertaken by the developments in recent episodes, but the bulk of it is still current, and may be worth a look if you’re a fan of the show.