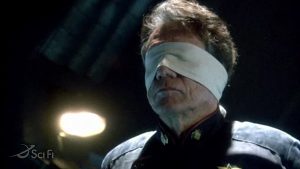 The other standout drama of the year, Breaking Bad, does less well (how its amazing pilot didn’t get nominations for Outstanding Writing and Outstanding Directing is beyond me) but does pick up a nomination for Outstanding Drama (along with the neglected but brilliant Big Love) and a couple of smaller nominations.

At the other end of the spectrum, Battlestar Galactica has been almost completely ignored once again, picking up only one major nomination, for Michael Rymer’s direction of ‘Daybreak Part 2’. The take-home message? That even when a science fiction show produces episodes of the calibre of ‘Revelations’, ‘The Oath’ or ‘Blood on the Scales’, all of which are, quite simply, some of the best television produced in the last ten years, it’s still not enough to find mainstream recognition.

Not, it must be said, that the literary world is much better.