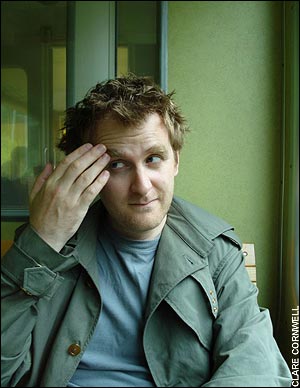 First a quick apology for the slightly sporadic posting over the past week. I’ve been a bit overwhelmed with work, and though I think I can see the light at the end of the tunnel (which excitingly means I might manage to snatch a few days to work on my novel before I go on holiday the week after next) I’m still about 5,000 words from freedom, so the patchy posting may continue for a while yet. Once I’m back online and have a bit of time to spare I’ve got some things coming I think people will like – a review of Caprica and a long piece on The Day of the Triffids (you know you want to know why), as well as some thoughts about (not) teaching the canon – but for the time being it’s all work, work, work in my world.

Anyway – having pieces spiked is an occupational hazard for reviewers. You slug your way through a book, write a review, and then for some reason – space, time, budget pressures – it doesn’t run. It doesn’t happen often, but when it does you can guarantee it’s a piece you either spent quite a lot of time on or you thought was pretty good (which may say something about my judgement, but we won’t go there).

The piece below is one of those pieces. It was written to coincide with the hardback release of Nick Harkaway’s The Gone-Away World last year, but in the end it didn’t run. At the time that seemed a pity, not least because the book is, in its own mad way, both ambitious and interesting (certainly as picaresque romps go, it beats Steve Toltz’s A Fraction of the Whole hands down for sheer energy and inventiveness). So, since the paperback has just been released, I thought it might be worth giving the piece a run here.

For anyone who’s interested, Harkaway has a pretty classy website, and runs a blog. The site also has some videos of him reading from the book. He’s also written about the complicating fact of his (extremely famous) father’s identity here.

I once had a conversation with the adult son of a famous writer. He was a nice guy – bright, funny, thoughtful – but when I asked him what I wanted to do with his life he froze. ‘Write,’ he said in a small voice after a moment, ‘though it’s sort of weird when I try to’.

It was a conversation that came back to me while reading Nick Harkaway’s debut, The Gone-Away World. Because as anxiety of influence goes, Harkaway – the son of David Cornwell, or John Le Carré – must have had it in spades.

Perhaps unsurprisingly, in interviews Harkaway seems to strike a slightly uneasy balance between filial affection and a desire to distance himself from his famous forebear, no doubt seeking to have his book assessed in its own right: a famous father is, as Harkaway discovered after the novel sold for a staggering £300,000, inevitably something of a double-edged sword. Yet faced with the book itself, in all its joyous, exuberant improbability, there can be little doubt Harkaway’s success is of his own making and no-one else’s.

Something like a cross between The Road and Kung Fu Panda, The Gone Away World is a crazed, shaggy-dog post-apocalyptic picaresque, with more than enough brio and cheek to leap its improbabilities in a single bound. Insofar as it lends itself to précis, it begins in a near-future in which Cuba has entered into a political union with Great Britain, thereby creating the United Island Kingdoms of Britain, Northern Ireland and Cuba Libré, or, as the wits would have it, Cubritannia (a move which delights the Cubans for its economic and political possibilities and the British because it guarantees “an influx of well-trained, educated people of pleasing physical appearance who have rhythm”).

In this future the narrator – who for reasons which become clear later in the book remains nameless – and his best friend Gonzo Lubitsh grow up in sleepy Cricklewood Cove, a place mostly notable for being home to Assumption Soames’ Soames School for the Children of Townsfolk, and the academy of Master Wu, of the Way of the Voiceless Dragon.

When a flirtation with university politics and Zaher Bey, the leader in exile of the tiny Central Asian country of Addeh Katir leads to the narrator’s arrest by a privatised extra-legal but government-sanctioned anti-terrorist squad and leaves him virtually unemployable, the narrator finds himself working in a high-tech special forces and weapon research unit. Under the command of Professor Derek, this team has invented the Go Away Bomb, a device which strips the information out of the matter comprising its target, converting it into what they think is undifferentiated nothing, but is really – as the narrator and the rest of the world discover when the Go Away Bomb is simultaneously (and surprisingly) deployed by most countries in the world at once in a good old-fashioned bout of what used to be known as MAD, or Mutually Assured Destruction – actually converts it into Stuff, a denatured form of matter which has the unfortunate tendency to take on whatever form flits through the mind of the creatures closest to it. In the ruined and depopulated world left behind, the only refuge from the nightmares that spring from Stuff is found along the edges of the Pipe, a conduit laid by the mysterious Jorgmund Corporation.

In the hands of a lesser – or at least a less confident – writer, such a plot might seem ridiculous, but Harkaway approaches his subject matter with such joyous abandon and good humour it’s impossible not to respond in kind. And while the novel’s influences – which run the gamut from Don Quixote to Fight Club, and The Karate Kid to William Gibson and take in almost everything in between – are clear, it never feels freighted down by them, or derivative.

None of which is to say it all works. Certainly the book’s weakest section is its final 50 pages, though that is as much a function of the picaresque form’s natural lack of interest in narrative closure as any weakness in the novel itself – but for the most part it does, bouncing with the sort of careless ease that necessarily belies the authorial control underlying it from digressions about the nature of politics to self-mocking kung fu parables, from bawdy Harry Potteresque university high-jinks to a chilling vision of a world gone mad.

Yet underpinning it – and if one was looking for an echo of Harkaway père this might be it – is an unswerving moral clarity. For all the geekish delight Harkaway takes in his inventions, The Gone-Away World’s comedy is rooted in a powerful sense of the corrupted and corrupting nature of power, and of its indifference to individual freedom, or even existence. And it is in this respect that The Gone-Away World’s picaresque pleasures most truly, and most brilliantly repays its debt to the steely satire of Fielding and Swift and even Rabelais.