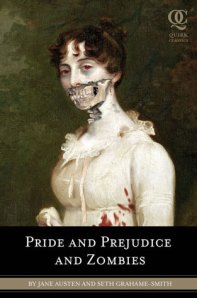 I promise I’ll stop after this, but EW has an interview with the improbably named author of Pride and Prejudice and Zombies, Seth Grahame-Smith, about his book and discovering his wasn’t the only Jane Austen mash-up on the market. (I’ve also rather belatedly realized he’s the same Seth Grahame-Smith who blogs on Huffington Post, which probably reveals some unexamined snobbery on my part, but we won’t got there).