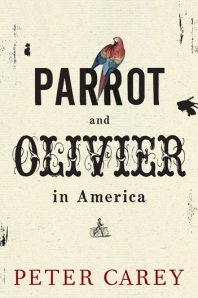 Just a quick note to let you know the longlist for this year’s Miles Franklin Award has been announced. I’ll leave discussion of it to others, but it includes both big names like Thomas Keneally and Peter Temple and debut books from writers such as Deborah Forster (for The Book of Emmett) and Patrick Allington (Figurehead). And, as always, there are surprising omissions: just off my head I would have thought Steven Amsterdam’s Things We Didn’t See Coming and Kalinda Ashton’s The Danger Game were shoo-ins for the longlist at least, and while I’ve not read it I’m interested (especially given the reviews it’s received) Cate Kennedy’s The World Beneath didn’t make the cut. Interesting also that the definition of “portraying Australian life in any of its phases”, which has so bedevilled the Award in the past, is now elastic enough to include Peter Carey’s “American” novel, Parrot and Olivier in America, a book that, while one might make an argument seeks to explore the differing origins of the Australian and American minds, is really only Australian in the sense that one of the narrators was, for a time, a convict.

The full longlist is:

Congratulations to all the longlisted writers.