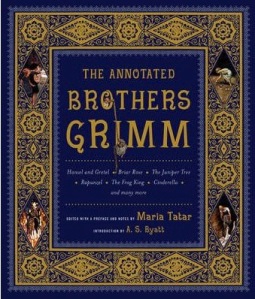 I’ve been reading Maria Tatar’s Annotated Brothers Grimm, which takes a number of the Grimm’s tales and explores their various incarnations, histories and interpretations. It’s a fascinating book in its own right (and a strikingly beautiful one, with illustrations by Arthur Rackham, Walter Crane and George Cruikshank, amongst others) but one of the highlights is A.S. Byatt’s introduction.

Of course Byatt’s written about fairy tales before, as well as rewriting a few, and exploring the social context and cost of such tales and their celebration in her remarkable 2009 novel, The Children’s Book. But her introduction to the Tatar is particularly interesting, not least because of its invocation of the work of Max Lüthi:

“The best single description I know of the world of the fairy tale is that of Max Lüthi who describes it as an abstract world, full of discrete, interchangeable people, objects, and incidents, all of which are isolated and nonetheless interconnected, in a kind of web of two-dimensional meaning. Everything in the tales appears to happen entirely by chance – and this has the strange effect of making it appear that nothing happens by chance, that everything is fated.”

I assume the book Byatt’s referring to is Lüthi’s The European Folktale: Form and Nature, which explores this precise quality, and which is itself a pretty remarkable document. But whether it is or not, she’s right: along with the sense that they are accessing something dreamlike and below the level of language, much of the unsettling (and beguiling) power of fairy tales arises from their weird inversion of the normal processes of fate and coincidence. Indeed I’d go so far as to suggest that this inversion is effective at least in part because it reminds us of how the world must appear to children, for whom everything is full of mystery and hidden meaning, and for whom adults must seem both purposeful and frighteningly capricious.