Dave Eggers vs the Wild Things 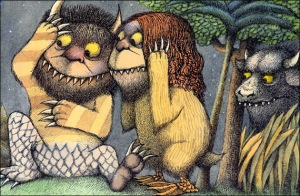 If you’re not already feeling exhausted by the promotional campaign for Where the Wild Things Are, this week’s New Yorker has an interview with the freewheeling Dave Eggers, who has a lot of very interesting things to say about The Wild Things

, his novelization of the script of Spike Jonze’s film adaptation of Maurice Sendak’s picture book. You can also read a chapter of Eggers’ novel here, or pre-order a special fur-covered edition from Amazon here

Meanwhile the extended trailer featuring interviews with Sendak and Jonze which was released a few weeks ago seems to have reappeared on Youtube (at the time of my last post it seemed to have been removed for copyright reasons). Hopefully it won’t vanish again, because it’s really rather wonderful to hear Sendak speak about his creation.