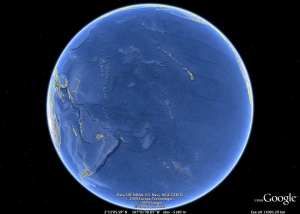 There’s something to be written here about the gap between our ability to image the natural world and our understanding of it, particularly in the context of the oceans. Certainly there’s an irony at work in the fact that we know so little about what lies beneath the waves, the speed with which we are destroying it and the fact anyone with a computer terminal can now gaze at an exquisitely detailed sonar model of the ocean floor. But all that aside, this is an amazing thing, so perhaps rather than maundering on I’ll just give in to the marvel of the technology for a moment.

And if anyone is interested in the things that live in the ocean, check out the Census of Marine Life.

Update: New Scientist helpfully informs me that the new version of Google Earth also lets you visit the empty oceans and towering peaks of Mars. Check out the Google Earth blog for instructions on how to use the new feature.