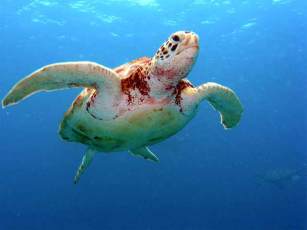 I don’t often come across books I think everybody should read, but Callum Roberts’ Ocean of Life, which I reviewed for Saturday’s Weekend Australian, is definitely one of them.

My desire for people to read it isn’t because it’s beautiful, or liberating or even particularly wonderfully written. It’s because it manages, better than almost any other book I’ve read, to communicate the sheer scale of the catastrophe that’s taking place beneath the waves.

As I say in my review, I think its contents are likely to prove deeply confronting for many people. Although much of the material Roberts gathers together will be familiar to anybody with an interest in marine ecosystems I suspect the urgency and complexity of the crisis will come as a shock to people who aren’t. I challenge anybody to read the sections on ocean acidification or anoxic dead zones and not feel disturbed, or to feel comfortable reading Roberts’ lucid analysis of the speed with which fish stocks are collapsing through overfishing.

But in a way the most shocking bits of the book aren’t the facts and figures but the allusions early on to the sheer fecundity of the oceans before humans began to harvest them. Early in the book there’s a remarkable pair of excerpts from a work by the Roman writer, Oppian of Corycus (somebody, I have to confess, I wasn’t familiar with prior to reading the book), describing the methods used to catch the huge schools of tuna that once existed in the Mediterranean.

Most of these involve nets, into which the tuna pour, “without end”, but one is more basic, and relies on the use of a heavy log with spikes in it which is then dropped into the water.

I found the idea that fish might have been so plentiful it was possible to catch them with a  spiked log mind-boggling, as I’m sure many others will. But once one goes looking there are many such examples available.

One of my favourite concerns turtles. I have a longstanding fascination with turtles, which have always seemed to me to be creatures of great grace and beauty (I’ve wanted to write about them for years), and some of the most distressing material in Roberts’ book concerns them and the rapid declines taking place in many populations. Pacific populations of leatherback turtles, for instance, have declined more than 95% in the past 50 years.

But the example I’m thinking of doesn’t appear in Ocean of Life and doesn’t concern leatherbacks. Instead it relates to green sea turtles. These days there are estimated to be less than 90,000 nesting female green sea turtles left worldwide, yet when Europeans first arrived in the Americas 500 years ago it is believed there were 100 million in the Caribbean alone.

Exactly how reliable these sorts of estimates are is obviously an open question, and not one I’m in a position to assess. Ocean of Life includes an interesting discussion of attempts to derive historical fishing yields from extant data, while other studies have used at prices at market to estimate the same. But whether the figure was accurate or not, the fact is that turtles were once so common in the Caribbean that when Columbus arrived feeding groups often filled the ocean to the horizon, and as late as the eighteenth century ships that had lost their way to the Cayman Islands could steer there entirely by the noise of green sea turtles returning to nest.

If you’re staggered by that idea I suggest you read Ocean of Life, a book that doesn’t just make clear how much trouble the oceans are in, but goes one step further and offers an outline for a plan of action. And once you’ve read it, buy a second copy and send it to your local member of parliament, or hand it on to somebody else. Because as I say in my review, this is one of those rare books about the ocean that should be read not just by everybody with an interest in marine ecosystems, but by business leaders, politicians and policy-makers around the world.

Update: I’ve just discovered there’s an excerpt from Ocean of Life over at Newsweek. Please read it.