Beyond the Break: On Surfing and Writing 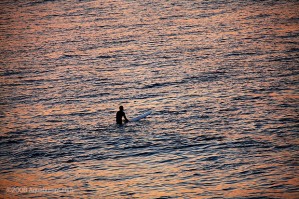 Two or three times a week, twelve months of the year, I make my way to the beach with my brother and a small group of friends. Although the purpose of the trip is what we call “ocean time”, which is code for surfing, it is also about a sort of escape, not just from our work and from our day to day lives, but from the more controlled aspects of the selves we need to be to live those lives.

The result is a little like playing hooky: slightly overcharged and somehow suspended out of normality. It’s also almost exclusively male, and curiously, for something that is about escape, is itself highly ritualised. From the time-coded pick-ups to the arguments about which beaches we will check out to the perving on chicks these excursions conform to a script which varies only in its detail. 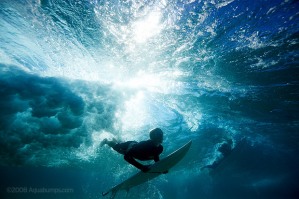 How much the sense of escape is connected to the actual surfing I’m not sure. It may be that the surfing is merely a pretext for this behaviour, as shopping or golf or fishing clearly are for other people, at least in part. But although we all spend time together for other purposes, much of it also involving physical activity – running, gym, occasionally snorkelling or diving – none of these other expeditions have the same sense of excitement and freedom, either for me or the others.

I suspect most people conceive of writing – and people who write, with a few notable exceptions – as confined to a sphere which not just excludes the physical, but which actually exists in some sort of opposition to it. In fact the processes of writing, and of entering a space where it is possible to write, seem to me to be about a way of being which is almost seamlessly continuous with the life of the body.

Writing, at least the sort I’m interested in, is about communicating the nature of being. Despite its medium, it is a conversation between minds about aspects of existence – psychological, spiritual, emotional – which exist independent of language, and which are for the most part irreducible to mere words. It’s about making the apprehended but inexpressible communicable, about taking the pre-verbal and ineffable experience of emotion and passing that experience on to another. That mere words have this ability to transcend their own meanings, to offer us a glimpse of the mirrors that lie in the inner worlds of others is something we have all felt in that moment of recognition that comes when something we read or hear strikes us as somehow right or true, that sense a chord has been struck somewhere within us, its meanings neither simple nor easily explained.

Like music, any piece of writing has a shape and cadence of its own. It is about rhythms, in language, in character, in story. It is these rhythms that you seek when you write, for they are the contours you try and bring forth. What guides you is not the intellect, or at least not the conscious part of it, but something more intuitive. It is the sense that you are following a shape which somehow already exists, something not so much invented as implicit in the thing itself. Just as sculptors claim to see a shape within the uncarved stone, so the story seems to be already there, like a name half-forgotten which lingers on the tip of the tongue.

Understood like this the process of writing is more a kind of listening than anything, a quiet attendance to the thing. Like the shaping of objects with the hands, the turn of a pot upon a wheel or a lathe upon wood, it is a process in which the intrusion of the conscious mind is often a hindrance, for the important thing in trying to find these rhythms is not to try too hard, not to force it. To hear the rhythms in a thing, to let it happen, you must learn to let go of your intentions, to forget the self and just be.

Learning to do this is one of the hardest things about writing. When a book is near its end it usually has a kind of momentum, an effortlessness, as if some apex has been passed and now the run is downhill, but before that point it can be difficult to find the rhythms you are seeking. Forgetting the self and entering that state of flow is not something that can be just picked up and put down: it requires large spaces of time, room to think and tinker, or just to be.

But it’s not just a question of time. What is needed is a way of escaping the life you are immersed within, of connecting with those things which ground you and your work. Different people find this in different ways, but increasingly I have found it through the stolen time of surfing.

Surfers often talk about their sport in almost religious terms, and although I don’t have a lot of sympathy for much of the culture that surrounds surfing, this sense of the act as a kind of spiritual journey is one I understand very well. To leave the shore and swim out, through the break and over the back, is to feel yourself slip free of your moorings and give yourself to the elements. Although your conscious mind still matters, you enter a world where it is your physical existence that matters first and foremost, the movement of your body in the water, with the water. 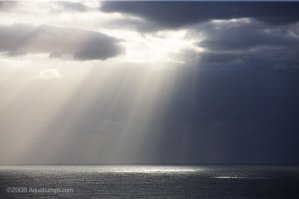 Sometimes the rewards for this are no more than the joy of playing in the ocean, a simple pleasure in the act itself. But there are other times, most often in the last hour or so of dusk, when the beach is quiet and the sky has begun to fade, when it is far more. Then, as the ocean moves beneath you and the long feed of the clouds passes overhead it  possible to sense the presence of a meaning which lingers just out of reach. It is to do with time, and its depth, with the rhythm of the sky and the waves, the cry of the birds as they pass overhead. Apprehended not consciously but somewhere deeper, this meaning beats like the pulse of a heart, something always there but of which we are only occasionally aware; deep and ceaseless, it fills the fabric of the world until it trembles with its weight.

This sense of the world’s presence in its pieces, of its divinity is one which runs deep in my writing. But the knowledge of its existence grounds me in a more mundane way, binding me to the act of surfing, to the escape it offers. For in the loss of self that surfing demands, the submission of the conscious mind to the rhythms of the ocean, I find a sort of peace, a capacity to move and think freely, and ultimately, to attain the sort of equilibrium I need to write.

(A substantially different version of the piece appeared in Good Reading Magazine in 2004. This version © James Bradley, 2009. All images on this page are provided courtesy of Eugene Tan at www.aquabumps.com).