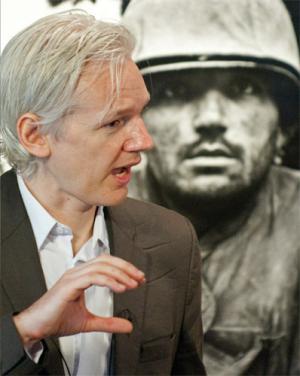 As most of you will be aware, last night Julian Assange surrendered to police in London on sexual assault charges. Like many others I’m deeply perturbed by this development, especially given the pretty clear evidence the charges are weak at best and that the Swedish Government (which has been significantly embarrassed by the revelations in the latest round of document dumps) has interfered with the process underlying them.

For what it’s worth, my views about Wikileaks are complex. I’m not convinced total transparency is either practical or desirable. But by the same token confidentiality and control over the flow of information is one of the tools governments and other interests employ to control the public and manipulate public discourse and opinion.

All of which is a long-winded way of saying Wikileaks is an imperfect creation, but one of immense importance. It heralds a profound rewriting of the relationship between the individual and the state, the governed and the governing. By fatally undermining the capacity of the powerful to mislead the public it embodies precisely the values a free media – and by extension a free society – should aspire to.

This is not to say it’s perfect. Unlike the evidence of malfeasance and illegal action by governments around the world, I’m unconvinced much of the tattle in the diplomatic cables is valuable or newsworthy. But that’s not an argument against Wikileaks more generally: freedom of expression and a free media necessarily assumes ongoing debate about the limits of public interest, and commensurately, errors in judgement about those limits. A free media is by its nature a ragged and disputational creature.

Part of what makes Wikileaks genuinely revolutionary is its refusal to accept that there is a public interest beyond the right to know. By rejecting this notion they also reject the collusive relationship with power that undermines the effectiveness of so much media. This fundamentally alters many aspects of our public discourse, and will, over time, alter the very nature of society, both for the better and, I suspect, the worse. It is also, to my mind, an unsustainable and utopian ideal: the proper functioning of democratic society is incompatible with total transparency. But by redefining the limits of our right to know it creates a new standard to which free societies should aspire, and simultaneously provides a disruptive corollary to that freedom which will help safeguard it.

That our politicians have been slow to grasp the larger implications of Wikileaks is hardly surprising. I think it’s increasingly obvious we’re in a moment of historical transition, a transition which will be shaped both by forces beyond our control, such as climate change, and by the economic and social effects of new technology and global media. Neither our governments nor our political and social institutions are showing much sign of being up to either set of challenges, and our politicians are manifestly inadequate to both.

Here in Australia the response has been slipshod and cynical, demonstrating the worst aspects of the Labor Party’s increasingly reactionary and paternalistic mindset. Prime Minister Julia Gillard looked ridiculous last week parroting the American line that Assange was a criminal, and compounded the blunder yesterday with her assertion that the release of information was illegal because it relied upon an illegal act.

The exact seriousness of the threat to Assange is unclear, and will in the first instance depend upon whether British courts uphold an extradition order to return him to Sweden. What is clear is that a writer and journalist has been imprisoned on charges which are self-evidently connected to his work as a writer and journalist, and to his part in revealing evidence of illegal and unethical behaviour by the powerful. In such a context the obligation upon the Australian government, and indeed all people who claim to support freedom of expression and the free media is to protest as loudly and as vociferously as possible.

Having been involved  off and on with Sydney PEN Centre over the years, I’m painfully aware of the difficulty of embarrassing governments which abuse freedom of expression. But I’m also aware that protesting does help, and that despite its statements to date, the Australian Government and Prime Minister Gillard may yet see their way to do what is right by Assange.

To this end I was one of the more than 200 people who signed the open letter to Prime Minister Gillard by Jeff Sparrow and Lizzie O’Shea that was published on the ABC’s The Drum yesterday.

Open letters of this sort always seem to me to be oddly quixotic creations, more symbolic of the powerlessness of those who sign than any real influence. But this time I’m not so sure. As of a moment ago there were more than 4000 comments, and the response was overwhelmingly supportive. That’s not to say there aren’t detractors, but it’s difficult not to wonder whether Assange’s newfound celebrity will prove a lightning rod for the changes that are clearly beginning to take place. As the events of the last two and a bit years and from the GFC on in particular have demonstrated, the rules that have defined our world for the best part of half a century are breaking down, and the relationship between the public and those in authority is growing increasingly poisonous.

This isn’t always a good thing – certainly the crazed, reactionary convulsions of the Australian and American political landscapes in 2010 have not made our societies happier or suggested our politicians and media have any real idea about how to deal with what’s happening. But it’s also increasingly difficult to ignore the fact that the ground is shifting beneath our feet.

Having said all that I’d like to ask three things. The first is that you visit The Drum and read Jeff and Lizzie’s letter, which makes a series of unexceptional demands relating to Assange’s rights as an Australian citizen, and the obligations of the Australian Government to safeguard his liberty. As it indicates at the beginning, many of the signatories are not uncritical of the larger Wikileaks project, but the principles set out in the letter transcend those differences.

The second is that you take a few minutes to read some of the better commentary about Wiileaks. I’m going to suggest you begin with Assange’s own essays about authoritarianism, conspiracy and transparency. As anyone who reads them will be able to see, Assange is neither a terrorist nor a Cold War villain out of a James Bond movie, but a serious thinker with profound and revolutionary ideas about the relationship between the state and information. If the essays themselves seem too daunting I’d urge you to at the very least skim the analysis of their content on zunguzungu.

I’d also suggest reading three pieces by Guy Rundle, Bernard Keane and Clay Shirky, all of which offer interesting and provocative perspectives on the question (Rundle and Shirky in particular do useful work placing the events of recent weeks in historical context and trying to think through their larger implications).

You should also be sure you read Assange’s op-ed in this morning’s Australian, which was written in the hours before his arrest. Given The Australian’s behaviour and pronouncements during the Groggate and TwitDef scandals of recent weeks it may come as a surprise to many that it’s clearly placing its not inconsiderable weight behind Assange (though perhaps not as big a surprise as it may have been to many of its subscribers, who are no doubt choking on their cereal as I type). But I’m not sure it’s that surprising, not just because it’s a reminder of the The Australian’s more general mercurialness, but because as Assange himself points out, a belief in the importance of a free and unfettered media is one of News Limited’s fundamental principles (even if it’s not always demonstrated by their actions or drive for market dominance).

Finally, the third thing I’d like you to do is suggest things you’ve seen or read that add substantially to this debate. I’m sure the days and weeks to come will produce a torrent of coverage, and it’s be nice to aggregate – or indeed wiki – it here. So if you have links, bring them; I want to see them.

Tags: Jeff Sparrow, Julia Gillard, Julian Assange, Lizzie O'Shea, Wikileaks
From: Media, Politics
← A blast from the past: me talking about The Resurrectionist
Summer and the myths of Australianness →
22 Comments Post a comment