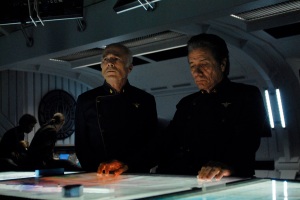 There’s a terrific piece by Laura Miller about the Battlestar Galactica finale over at Salon, which pretty much nails a lot of what went wrong in the final ten episodes, and most particularly the mess of the finale. Most tellingly, I think, she points to the contrast between the (admittedly controversial) non-ending of The Sopranos and the desperate and misguided desire to tie up all of Battlestar Galactica’s loose ends which so muddied ‘Daybreak’.

That said, she also argues that:

“Adama was always the series’ most conventional figure, the old-fashioned, admirable leader-hero that American popular culture typically insists upon. This also made him the least interesting character psychologically, but he was essential all the same; the rest of the survivors needed him as a fixed point, a star to steer by.”

At one level she’s right; Adama is one of Battlestar Galactica’s more conventional figures. Certainly without the strength of Edward James Olmos’ performance he would be little more than a cardboard cut-out. But the strength of Olmos’ performance also grounds one of the less conventional aspects of Adama, namely his violence and anger. The role he is playing, that of the leader-hero, is generally constructed in such a way as to allow the character to be an essentially decent, honest man, who only turns to violence when provoked. It is, in many ways, a peculiarly American fantasy of the soldier-farmer, the man of the earth who takes up arms to defend his rights and those of others.

Adama, by contrast, is a much darker creation. More Clint Eastwood in Unforgiven than Gary Cooper, his outward semblance of control is largely a facade, designed to keep a check on the anger and violence that seethe at his core. As we are reminded on a number of occasions, his impulses are authoritarian, even despotic, his first loyalty to his uniform. He is a soldier, and a good one, but soldiering is not, as we are often reminded, a profession which tends to make nice people out of those who excel at it.

This is of course of a piece with Battlestar Galactica’s deeper interest in the brutalizing nature of war, and its ambiguous attitude to the nature and exercise of power in general. Indeed Adama is in large part interesting precisely because his nature belies his conventional facade, so much so that the term of respect the crew bestow upon him, “the Old Man”, can often seem oddly ambivalent, conjuring associations of control, and violence as much as paternal affection.

(For those anxious to fill the hole left by Battlestar Galactica’s passing, SciFi have released seven clips from the upcoming prequel/spinoff, Caprica, all of which are available over at io9).