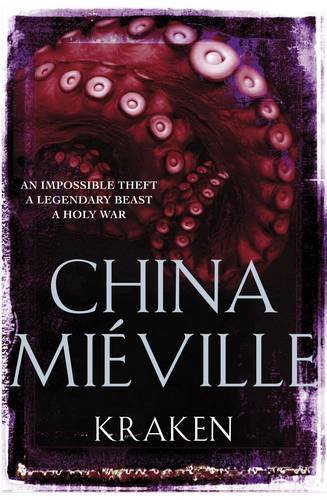 If there was an irony to China Miéville winning the Hugo Award for The City and the City earlier this month it was that after a string of novels peopled by extra-planar vampires, human beetles and living cactuses, it was a book almost entirely devoid of science fictional geegaws that finally won him the SF world’s highest honour.

That’s not to say The City and the City wasn’t imaginative; quite the reverse. By grafting a dreamlike, almost Kafkaesque vision of a city divided not by walls, but by its inhabitants’ ability to “unsee” their neighbours onto a noirish thriller Miéville concocted a political parable that bears comparison not just to Orwell and Pynchon, but to more overtly science fictional writers such as Dick. But there’s no denying its Eastern Bloc austerity stood in stark contrast to the minutely detailed, wildly inventive worlds of books such as Perdido Street Station and Iron Council.

Outwardly at least, Miéville’s new novel, Kraken marks a return to the fecund worlds of his earlier fiction. Set in a London teeming with dead gods and doomsday cults, and centring on the search for the body of a giant squid stolen from the Natural History Museum which is the key to the onrushing end of everything, it plays merry havoc with the tropes of Urban Fantasy, serving up a dizzying cast of magical assassins and two-bit scryers, teleporters and fist-headed enforcers.

Even for Miéville it is an exhilaratingly inventive ride, a heady hybrid of Lovecraft and Lock, Stock and Two Smoking Barrels complete with a an (Oc)Cult Squad of the Met staffed by a foul-mouthed witch and a 21st century Van Helsing, secret churches under the city and perhaps most indelibly (if you’ll pardon the pun) a gangster tattooed on some unfortunate’s back. In a world where writers usually assume less is more, Kraken serves as a reminder that sometimes more is very definitely more, each chapter – sometimes each page – introducing new characters and cults, even as the plot swerves wildly back and forth.

It’s also Miéville’s most stylistically exuberant work to date, not just gloriously adjectival (“the shivering ghost-delirious Simon”, “late drab rain”, “evanescing bodies”) but wildly creative as well, marrying a marvellous ear for the rhythms of London English to the cracked semi-scientific jargon of occult literature. There’s something joyous in the description of undead Gods as “theurgic vermin”, or the notion that a job with the Cult Squad might require training in “Extreme Theology [and] self-defence”.

In the hands of a lesser writer it would probably all be completely overwhelming. Yet Miéville manages – at least for the most part – to keep all his balls in the air, at least partly because the book never takes itself seriously enough to lurch into either absurdity or portentousness. In contrast to earlier novels such as The City and the City and Perdido Street Station, where Miéville reworked and redefined the genres they deployed, Kraken wants to have its cake and eat it too, seeking to take tropes familiar from True Blood and Buffy the Vampire Slayer and push them to their limits and beyond, while simultaneously satirising not just the excesses of the genre it so deliriously appropriates, but the cultish tendencies of its fans.

But this jokiness also prevents the novel scoring the bullseye it so almost does. Because at the end of the day magic is about belief, and somehow – despite the energy of Miéville’s writing and the freewheeling craziness of its vision – it’s difficult not to feel that the novel as a whole is something closer to an exercise or an entertainment than an act of faith.